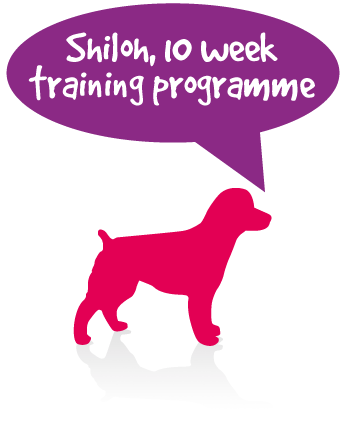 First I would like to say thank you very much to Paul for the excellent obedience/training you did with Shiloh in the 10 weeks that you worked with him. Shiloh is our lovely adorable, excitable and bouncy Cockapoo (medium size) with a lovely temperament and nature.

Prior to meeting Paul walks with Shiloh were basically him pulling constantly on the lead, stopping to sniff or pee at every tree, lampost, bush or pull to check out every bit of litter on the street and also to people he recognised. It was hard work!

When visitors came to the house his excitement levels would reach an all-time high with him jumping up, bouncing about and whining for attention, and would go on for ages. At 10 months old, and after trying methods I had read up on on how to stop your dog pulling etc, with no success, we decided to get an expert in.

I found Paul on the Internet and on his first consultation, after Shiloh’s greeting and excitement when he entered the house and taking him out to assess his walking on the lead, he suggested a 10 week programme. We were not sure what to expect at first or how Shiloh would respond to the training. Each week Paul would show us the techniques used at each session and make sure we used them correctly so as not to confuse Shiloh and encouraged us to use them on his walks between sessions. Paul covered every aspect of the problems of walking Shiloh, not just the pulling. Treats were tried at first and although he would normally do anything for a treat it was not going to work for training during walks. He was just not interested, he’s too excited and eager, it’s all about where he wants to go. So it was all down to techniques and strategies, verbal and non-verbal communication and body language. There were times when we thought it would take more than 10 weeks as most weeks were good but we had a couple of weeks where he seemed to go back a step or two. All part of the process as we came to learn.

At the end of the 10 week programme Shiloh is such a pleasure to walk. My mum and I now take him on long walks for an hour or more and we enjoy it so much. He does try to get ahead sometimes, but we just use the training to bring him back in step. He doesn’t bother with litter and such any more or stop to sniff/pee at every post, bush etc – the latter thanks to one session using the citronella spray collar. However, he is a dog so there’s always the odd one he can’t resist. But if I get my “ah ah” in first, he’ll leave it. He walks nicely into the park, no more being dragged through the gates and up the path, and no longer tries to join in football games when off the lead. Using the techniques Paul has showed us his excitement level when visitors call is decreasing, as we make sure they ignore him till he settles.

Now at 13 months old I cannot express how happy we are and how thankful to Paul my mum and I are with the progress Shiloh has made, and continues to make. Not only did Paul train our dog but us too! Also giving us valuable insight into how our dog thinks and certain behaviours especially when meeting other dogs. The whole experience was as good, calm and positive as Paul is.

We use cookies to analyse how visitors use our website to help us provide the best possible experience. However you can disable cookies at any time by changing your browser settings. Otherwise we’ll assume you’re ok to continue with cookies. Find out more.