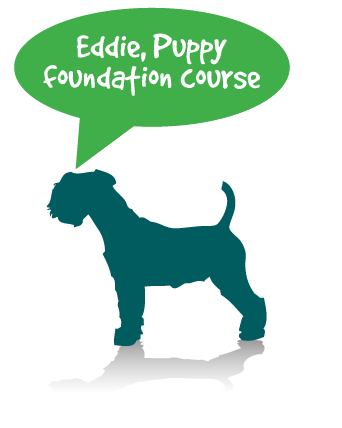 We adopted Eddie, a Lakeland Terrier Cross, from Battersea Dogs Home when he was around 9 months old and enrolled him in Paul’s puppy classes after a recommendation from a fellow puppy owner.

Eddie started to display some rather disturbing behaviour after a couple of weeks, where he would attack us and bite us and it would take all three of us to get him under control and to calm him down eventually. We mentioned this to Paul in the classes and he gave us invaluable advice on how to deal with it. By the time Eddie graduated from the course (with honours!) he was a different dog. He loved the training and adored Paul and we all learned a lot about dog behaviour and psychology.

I thought I was an experienced dog owner (having grown up with dogs and having had a dog before Eddie), but I would not have been able to cope with a highly-strung rescue puppy without Paul’s expert advice and help.

Paul is a true dog whisperer and we were lucky to find him. Eddie is now a well socialised, happy, bouncy dog who charms everyone he meets. Thank you Paul!

We use cookies to analyse how visitors use our website to help us provide the best possible experience. However you can disable cookies at any time by changing your browser settings. Otherwise we’ll assume you’re ok to continue with cookies. Find out more.